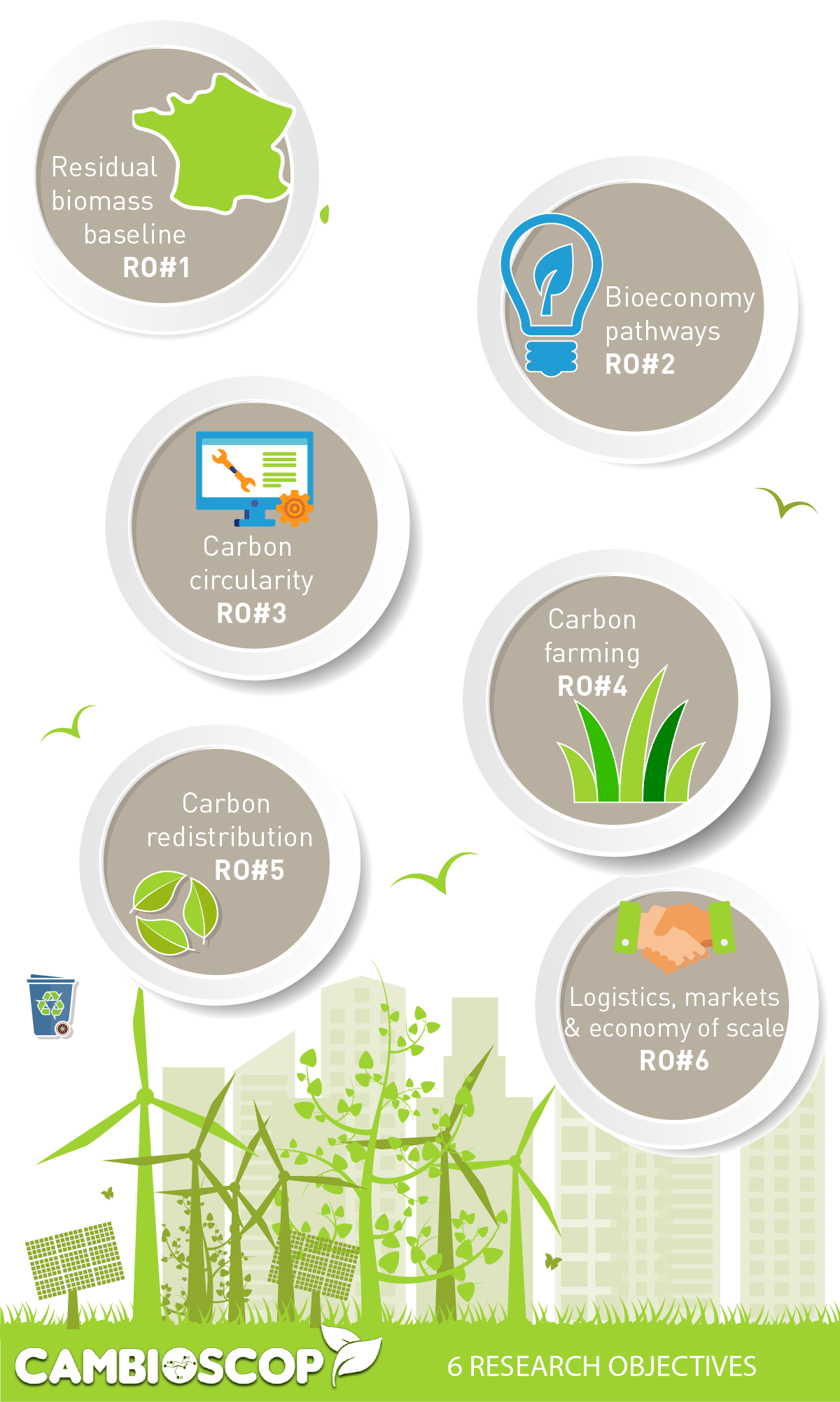 Bioeconomy and carbon circularity are European and French priorities in addressing innovation and competitiveness in the transition towards low fossil carbon use. Yet, the use of biogenic carbon for products and services where fossil carbon is used today poses key challenges. There is a scientific high agreement on a maximal available global biomass potential of 100 EJ y; in proportion, the 2016 global demand for energy alone was 550 EJ.

In addition, by inducing additional demands for biomass resources, there is a potential for increasing the pressure on constrained arable land and freshwater resources, among others.

On the other hand, the urgency to stabilize the global climate calls for solutions to postpone as far as possible the release of climate forcers to the atmosphere, and even to induce negative emissions, for which circular and bioeconomy are key.

CAMBIOSCOP proposes to address these issues by developing a foundation for establishing geolocalized, time-dependent and sustainable strategies for the development of bio-economy in France, looking at systems in integration rather than optimizing each in isolation as typically done. The lack of such integrated tools is acknowledged in the French bioeconomy strategy communication. The vision is to support decision makers in their investment choices today, so these are consistent with a sustainable and competitive bioeconomy tomorrow. In this endeavour, the major objective of this proposal is to propose a variety of tailored and quantified cost- and environmentally-efficient strategies towards the long-term development of France’s bioeconomy. CAMBIOSCOP has an important focus on biomass residues from primary, secondary as well as tertiary sectors of economic activity, these being expected to play a major role in supplying the feedstock needed for sustainable bioeconomy pathways, and being seen as an underexploited feedstock allowing to enlarge the biomass base. The residual biomass streams likely to be found in high density (per unit of area) in France are targeted, namely: agricultural (crop, manure), forestry (logging residues), grass (garden waste, unused meadows) and algae residues as well as food waste (municipal and selected industrial streams, e.g. wineries). 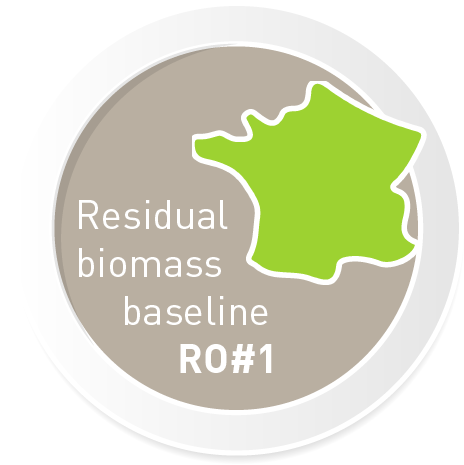 Develop a geo-localized quantification of the biophysically available potential for the residual biomass targeted, identifying the current use of these streams (so-called counterfactuals). This geo-quantified understanding of the residual biomass baseline (type, location, current use) is key for quantifying the environmental performance of any strategies, which can then be assessed against this baseline. Developing this baseline thus also involves a life cycle inventory (detailed quantification of substance, material and energy flows) capturing the current situation in terms of annual carbon, nitrogen, phosphorus and other relevant substance flows from today’s management of these residues.

Develop state-of-the-art life cycle inventories quantifying the annual carbon, nitrogen, phosphorus and other relevant substances flows resulting from converting the targeted biomass streams to a variety of bioeconomy products (proteins, bio-materials, building block chemicals, biomethane, liquid hydrocarbons for long-distance transportation, bio jet-fuels, among others). A variety of modular combinations will be studied, from the feedstock production up to the end-of-life, including the fate of all involved co-products and the emission flows this involves. A given “biomass-to-targeted product(s)” supply chain will therefore involve many variants (depending e.g. on the use of the co-products, the counterfactual use of the feedstock considered, the end-of-life selected, etc.). Pathways involving recovered CO2 as a feedstock (e.g. from fermentation processes, biogas upgrading, etc.) will also be considered. The vision is to prioritize the use of the selected bio-resources at the geo-localized level, but also to optimize their use by ensuring a maximal carbon circularity. It is envisioned to assess more than 300 bioeconomy supply chains.

Perform methodological advances to reflect the circularity of carbon in the studied bioeconomy pathways. This will translate into an effort to build a time-dependant inventory (over the whole life cycle system) allowing to quantify how long the carbon stays in the technosphere for all pathways, and thus which pathways allow to postpone the release of climate forcers. The climate change impact will be reflected at selected point of time (e.g. 2030, 2050, 2100) through the use of both the Global Temperature and Global Warming Potential metrics (GTP & GWP), and will consider the practical lifetime of technologies and processes in a dynamic perspective. This new method of temporal climate change impact for LCA will reflect the importance of emission timing in an easily communicable way to policy makers.

Investigate, through a meta-analysis, the possibility to integrate in the French landscape perennial C-3 and C-4 grass species acting as biopumps, i.e. allowing for a net transfer of carbon towards the soil carbon pool (e.g. tall Festuca species, specific Miscanthus species, alfalfa, deep-root species such as Brachiaria). This will uncover the key parameters upon which the performance of these bio-pumps varies (in terms of both carbon sequestration and biomass production, but also environmental including biodiversity and land & water  requirements concerns). These findings will be translated into a geo-localized analysis for France (considering its panorama of different agro-ecological conditions) proposing which of the selected bio-pump species can be cultivated and where, and a quantification of the net resulting carbon sink over time. The vision is to reflect the range of possibilities (i.e considering only marginal/degraded lands versus considering a maximal integration of bio-pumps via a reorganization of the agriculture). The identified key species will be considered as input for the pathways in RO2, in which case an LCA of their cultivation reflecting consideration for the counterfactual land use (i.e whether the land would have otherwise been used as arable or grazing land) will be included.

Propose a geolocalized removal threshold for agricultural residues that would otherwise be directly incorporated into soil (straw and root crop residues; these being a particularly important residual biomass resource in France). The geo-localized thresholds to be proposed will ensure the maintenance (at minima; enhancement at best) of a predetermined baseline soil carbon level over a long-term period (e.g. 300 years), and will include the use of manure and cover crops, when this applies. Here, we will also quantify the potential of all bioeconomy pathways of RO2 for returning carbon into the resilient soil carbon pool, through cost-efficient technologies. The vision is to evaluate to which extent part of the carbon can be re-distributed to the various fields so the threshold determined can be lowered for some locations, thus allowing more biomass to become available for bioeconomy.

Uncover the key barriers for the penetration of selected environmentally-performant pathways of RO2 as well as the potential synergies between given bioeconomy supply chains and propose competitive bioeconomy models for France. This includes an analysis of supply chain economics & logistics, of competition for the biomass resources, of new market impacts (e.g. proteins for human) and geo-localization considerations for the feedstock resources. This will lead to the proposal of tailored cost- and environmentally-efficient bioeconomy models for France. A final LCA will be performed to validate the environmental performance of these proposed models; the integration of both becoming a so-called integrated assessment model (IAM).

This project will fill a clear gap, as no such holistic bioeconomy platform being both consequential, dynamic, geo-localized and integrated with economic modelling currently exists. Through these insights over the whole supply chains and sectors of the economy, the major impact of the project is to uncover the limits of bioeconomy and guide research and investments towards the most promising technologies, supply-chains and business models for France. The vision is to capture unforeseen consequences before investments are made.

Further, this project will lead to clear propositions for postponing the releases of climate forcers to the atmosphere, which has been pointed out countless times as an uttermost urgency in order to stabilize the global climate. Research-wise, several modelling platforms will benefit from the methodological developments performed in this project (e.g. JRC DataM, life cycle inventories platforms), starting by the French MEANS platform that will benefit from several additions with regards to biomass conversion pathways and inclusion of soil carbon dynamics.

The project is expected to generate 10 original research articles (5 of the PI, 3 of the PhD student and 2 of the postdocs) and place France / TBI (ex. LISBP) at the forefront of integrated research approaches for circular- & bioeconomy.